The most recent Intergovernmental Panel on Climate Change (IPCC) report tells us what we already know: our climate is changing, and local communities like ours are already feeling the sting. We must continue to elect leaders who won’t just play lip service to environmental concerns, but can push past tired excuses to support the types of substantial change we need. This coming June, voters will be asked to cast their ballots, and we’re urging you to use your vote to elect environmental champions. Today, we will focus on one of the few competitive races in the County.

Sonoma County Board of Supervisors – District 2 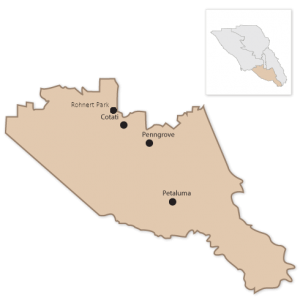 Sonoma County Conservation Action is proud to support Blake Hooper for the Sonoma County Board of Supervisors, district 2 seat. Blake is the challenger – but with significant experience. Blake currently serves as a Petaluma Planning Commissioner and is a legislative aide for the California State Senate. Blake has previously worked in a community role for Congressman Jared Huffman as well. For full disclosure, Blake Hooper is a member of the Sonoma County Conservation Action Board of Directors, though he obviously did not participate in the endorsement process. It did, however, underscore for our membership that his commitment to environmental issues isn’t a campaign talking point, but rather work that he actively engages in.
Anyone following his campaign on social media will quickly recognize two things: first is what an aggressive campaign he’s running – working day in and day out to really hear from constituents and talk about their issues. The second is how he’s centered equity in every aspect of his campaign.
Running against an incumbent is always an uphill battle. And yet, Blake boasts a very impressive list of local endorsements – including the last three Mayors of Petaluma, the last two Mayors of Rohnert Park, and the current Mayors of Cotati, Santa Rosa, Healdsburg, and Sebastopol. In fact, Blake is supported by a majority of City Councilmembers in every city that the 2nd Supervisorial district encompasses. The people who most rely on strong relationships with their County counterparts….support the challenger over the known commodity. He is also supported by the Sonoma County Democratic Party, the Sonoma County Green Party, California Young Democrats, North Bay Labor Council, and Sierra Club.

The incumbent, David Rabbitt, has a long track record for voters to consider, particularly when it comes to transportation. He is the current Chair of SMART, serves on the Golden Gate Transit Board, and is the former Chair of the Sonoma County Transportation Authority and Regional Climate Protection Authority. And in fairness to the incumbent, after nearly twelve years on the Board of Supervisors, David can rightfully tout some of the progressive accomplishments that have been realized by county government. We question, however, whether he was a leader on important environmental and social equity issues or a passenger along for the ride. David is largely regarded as the most conservative member of the Board, and as such, his voice has been absent from some key conversations, such as 2020’s Measure P, which sought greater transparency and accountability from the Sonoma County Sheriff’s office. Our membership has also found him inaccessible.

County leadership matters, and whether you live in District 2 or not, the decisions made by the Board of Supervisors will have significant impacts on the future of our region. We strongly urge you to support Blake Hooper for Supervisorial District 2 by walking, donating, and voting.