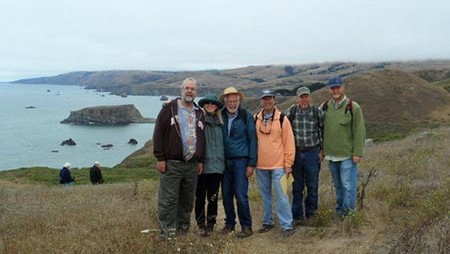 Well into his ninth decade, he energetically focused on promoting Sonoma County Conservation Action (SCCA) which he founded 25 years ago. In recent years he was campaigning for public access to Petaluma’s Lafferty Ranch, and for the completion of SMART rail and the California Coastal Trail. Coastwalk California, another organization he co-founded 31 years ago, is the nonprofit that advocates for the statewide California Coastal Trail (CCT) and public access to the California coastline. A popular segment of the CCT on the Sonoma coast bears his name, the Kortum Trail.

Bill traced his awareness of environmental concerns to early conversations with his parents: his mother, Vina, a descendent of the Donner party, and his father, Max, whose parents were the first wine makers in Calistoga on Kortum Canyon road. His parents introduced him at an early age to the outdoor splendor of Northern California. Even though there seemed to be no limit then to where he and his family could hike and camp, his father warned him that their access to such activities might well be lost to development by the time he grew up.

Born in Petaluma on July 22, 1927, Bill grew up first on Western Avenue in Petaluma and later on the Ely Road poultry farm that his father purchased in the 1930s. There, for his high school FFA project, Bill built a Grade A dairy barn and raised and milked a small herd of cows. He was inspired to pursue veterinary medicine by caring for his beloved cow Choco. He attended Petaluma High School (Class of 1945) but cut short his high school education to join the Merchant Marines. Bill then attended Santa Rosa Junior College and graduated from the School of Veterinary Medicine at UC Davis (class of 1952). Following graduation he was drafted into the Army Veterinary Corps and then established a veterinary practice in Cotati, worked on Cotati incorporation and advocated to locate the proposed State College to the area. He specialized in bovine veterinary medicine, and his travels on rural roads to far-flung dairies renewed his appreciation of the role of agriculture in preserving the natural beauty of Sonoma County. During the early 1960s, Bill began to more actively pursue his interest in environmental protection, helping his older brother Karl, Karl’s wife Jean, and David Pesonen in their efforts to stop PG&E from building a nuclear power plant at Bodega Head. As new challenges from well-financed development interests appeared, he worked with Chuck Rhinehart, Chuck Hinkle, Dick Day and others to form Californians Organized to Acquire Access to State Tidelands (COAAST). They opposed Castle & Cooke’s efforts to cut off 13 miles of coastal access at Sea Ranch, a battle which elevated public awareness of the importance of coastal access throughout California. Bill was a key player in the political maneuvering that led directly to the passage of Proposition 20 which established the public’s right to access the state’s coastal tidelands and created the California Coastal Commission.

Bill then turned his attention inland to his beloved Sonoma County, becoming involved in the preservation of open space and agricultural land through the creation of community separators and urban growth boundaries, the founding of the Sonoma County Farmlands Group, the establishment of the Sonoma County Open Space District, the creation of SMART, and the preservation of Heritage Roads. He was an early board member of the Sonoma Land Trust. One of the main objects of his attention and prime achievements was the creation of Sonoma County Conservation Action with its focus on educating and directly engaging the public on local environmental issues and policies using grassroots organizing. Bill and his wife Lucy were widely known as consistent sources of optimism and inspiration to all who worked with them. Lucy played a key role as partner and strategist.

Bill knew from experience that, as Peter Douglas said, “The coast is never saved, it’s always being saved. Our work, your work, is a labor of love that is never finished.” He applied this concept equally to his cherished Sonoma County. When he learned of a plan by the City of Petaluma to sell the Lafferty Ranch (a reservoir site in the Sonoma Mountains) to a private landowner, his timely letter to the editor alerted the environmental community to this sale, and the potential loss of public access on the west side of Sonoma Mountain. That battle still rages.

He received many honors for his efforts but probably his most cherished was the naming of the Kortum Trail from Goat Rock extending to Wrights Beach as part of the California Coastal Trail.

In 1954 Bill’s father ran a campaign for Congress which inspired in Bill to see public office as the road to successful activism. He was appointed in the 1960s to fill a vacancy on the Petaluma School Board to which he was subsequently reelected. In that capacity he was instrumental in the State’s purchase of Salt Point as an educational park.

He sought the 1st District Congressional seat in 1970s running on a core environmental platform. Bill was elected Sonoma County Supervisor in 1974 and was recalled two years later, strongly opposed by real estate development interests that feared his initiatives to protect open space and farmlands in the county. Bill was not discouraged by this setback and instead continued his advocacy for environmental protection. The county later enacted many of the visionary concepts that had so outraged the developers. Both he and others observed that he was ultimately more influential outside of elected office, operating as an advocate for direct action.

One of his unique and inspirational qualities was his balanced set of interests and passions beyond politics. Bill was a family man who made everyone feel welcome. Maxine Durney, Bill’s sister – an environmentalist in her own right – lived on the family ranch next to Bill and Lucy’s house, and the three of them fostered projects and festivities to make “The Hill” a focal point for several generations of family and friends.

A skilled carpenter with a well-developed sense of aesthetics, Bill helped design and build the home where he and Lucy raised their family. With its unique floor plan, it has a two story wall of windows, huge basalt columns like those in Devil’s Postpile National Monument and incorporating graceful wooden braces known as “ship’s knees” which he salvaged from an old ferry boat that had been abandoned in Benicia. Bill and Lucy’s home became a natural setting for spirited dinner table discussions and political strategy meetings that often continued over a lively game of croquet.

Bill is known within the family for his unique handmade Christmas gifts and ranch projects. He maintained a year-round garden and small vineyard from which, with a group of friends, he and Lucy made wine. He often stated that gardening was one of his most pleasurable activities and was where he would go to think about political hurdles.

He demonstrated his entrepreneurial and inventing skills by recruiting high school friends to convert a tractor into a hay baler during the labor shortage of war years and by inventing and patenting two scientifically recognized devices (IUI and IMD) for utilizing the immune system to combat disease in bovine herds.

Bill was predeceased by his parents, his brother Karl (founder of the San Francisco Maritime Museum), and his sister Maxine Durney. He is survived by his wife, the former Lucy Deam; children Frank, of Glendale, Julie Groves of Los Gatos, and Sam of New Haven, CT; daughters-in-law Ellin Kavanagh of Glendale and Hyun Ja Shin of New Haven, son-in-law Barry Groves; and grandchildren Mark Kortum, Holden and Dylan Groves, and Will and Grace Kortum; and numerous nieces and nephews.

Bill’s friends have suggested that his legacy can also be honored effectively by continuing his tradition of activism, focusing on his priorities of access to Lafferty Ranch and completion of the California Coastal Trail. 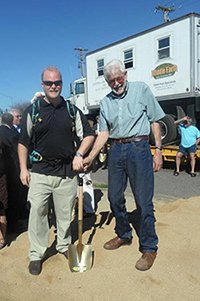 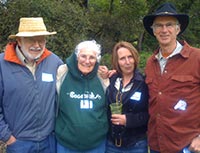